The Worst Used Minivans To Buy

Avoid These Used Minivans At all Costs 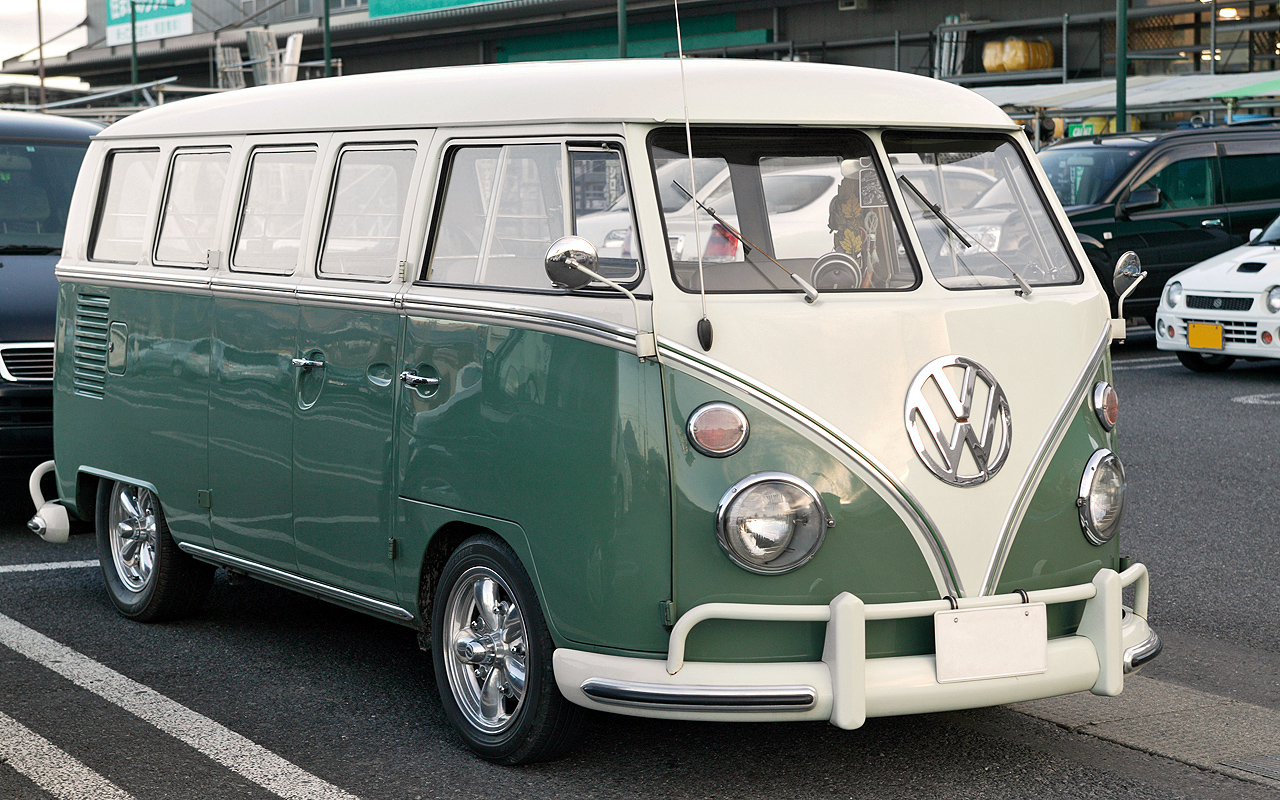 Across North American, used minivans have become a ubiquitous tool for busy parents, small delivery companies, and school systems. We say used minivans because of the rising cost of buying a new vehicle of any kind. Because of their utility and generally well appointed interiors, the minivan class seems to be increasing in cost faster than many other car groups. That leaves savvy buyers looking for used minivans in larger numbers.

The trouble with looking for used minivans; well, any sort of used vehicle, is that you have to do a ton of research to make sure you are getting the best possible buy. Not the best buy in the financial sense of the word, but in the quality of the vehicle that you are buying. That is why we decided to put together a list of the worst used minivans available. We want our readers to have the best information possible when spending a lot of their hard earned cash.

With so many used minivans on the North American market today, we decided to narrow our list to the used minivans that should have an average retail value between $6,000 and $15,000 according to KBB.com and nadaguides.com. Our assessment of the quality of these used minivans is based on information from Consumer Reports, owner reviews, and professional reviews. We will give you specific information as to why these are the worst used minivans to buy, so that you can decide whether you agree with us or not. Also, our list is in no particular order, so Number 1 is not necessarily the worst used minivan in the world, just the first unit that came to our attention. 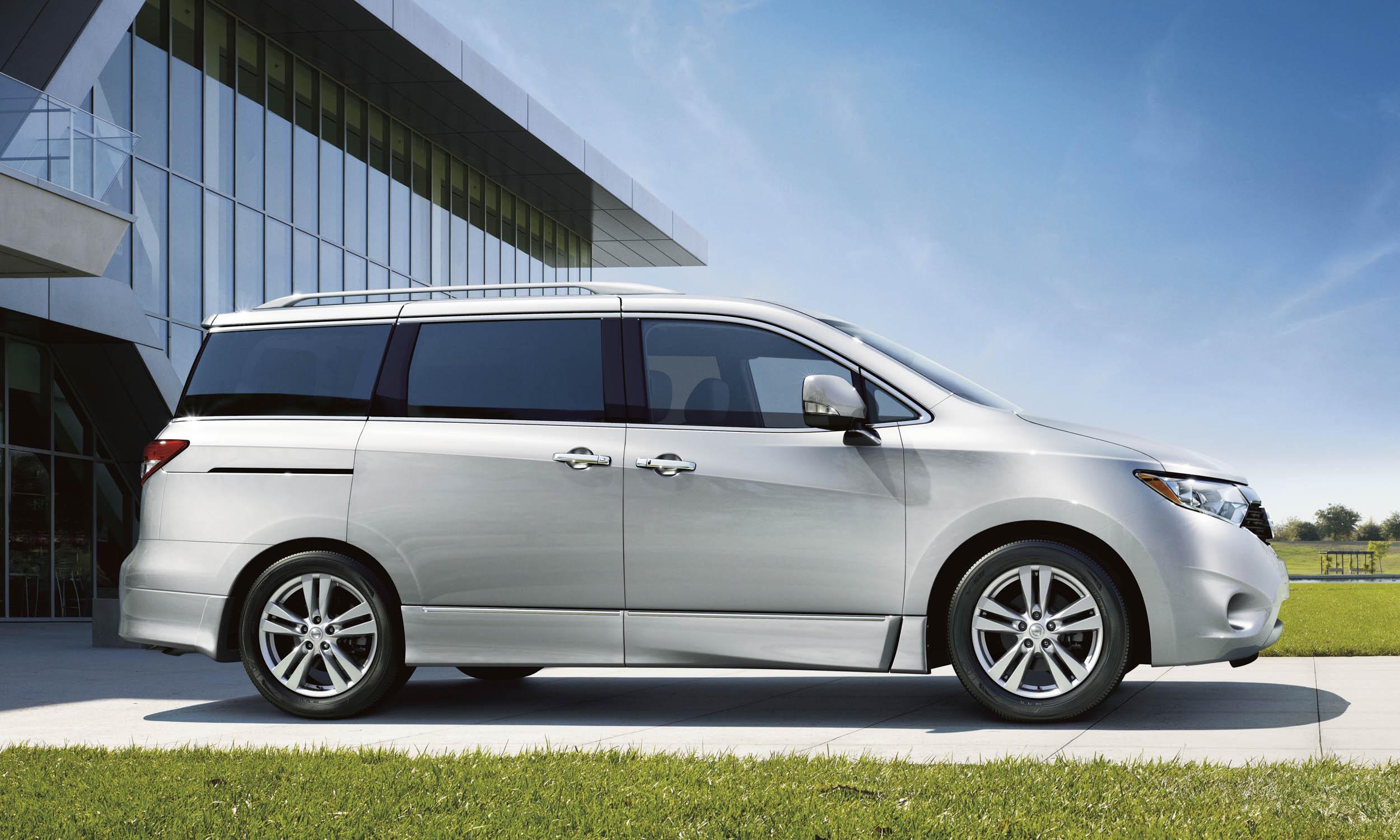 The Nissan Quest barely survived the 2017 model year and reached the end of its production run after the 2018 model year. There are many reasons the Quest is out; the main one being that Nissan has not updated the oddly designed minivan for several years.

Having an outdated design alone does not land the Nissan Quest on our list of the worst used minivans, though. The main drawback to the Quest is its interior. First up, the Quest can only seat a maximum of seven when many of its competitors can handle eight. It also offers fewer interior storage areas throughout the cabin, then there is the 25.7 cubic feet of cargo capacity. While nearly 26 cubic feet sounds significant, it is smaller than nearly every other model in the segment.

The Nissan Quest does have the saving grace of being equipped with a fuel efficient engine for the class. The most recent models are all powered by a 3.5L V6 that is capable of 260 hp and 240 lb-ft of torque while delivering 22 mpg on the highway.

Even if you can overlook the drab exterior, the cheap plastic interior of this used minivan can almost turn your stomach. Once inside, you will find average passenger space and less-than-stellar cargo space. These things could be overlooked if the Grand Caravan offered a smooth and quiet ride, but it doesn’t offer either. In fact, at highway speeds, the Grand Caravan is one of the noisiest used minivans around. The engine and transmission noise in the cabin can drive you insane if you ride long enough. When you throw in the wind and road noise that join the cacophony, you can see why this used minivan should never leave town. The single engine option in the latest models is a 3.6L V6 that offers 283 hp and 260 lb-ft of torque. The powerplant is mated to a six-speed automatic. The duo offers 25 mpg on the highway. That is solid fuel economy, if you can stand all of the cabin noise.

One good option the Dodge Grand Caravan has to offer is the Stow ‘n Go second-row seating system that allows you to quickly store the center row of seats for extra cargo space. 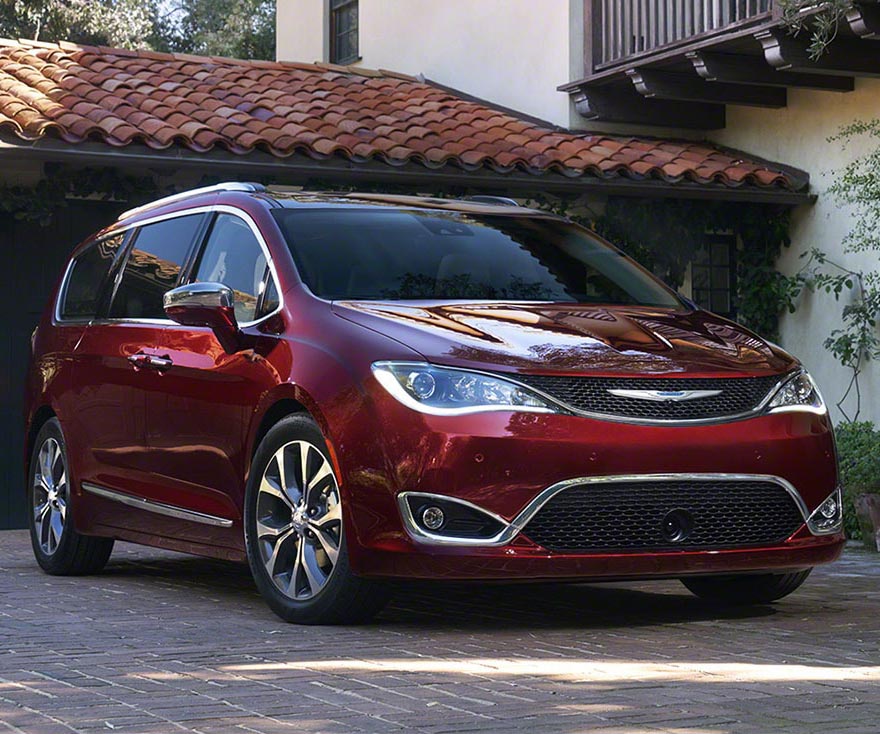 The Stow ‘n Go seating is standard equipment in the Town & Country and there are more creature comfort options available than you will find in the Dodge Grand caravan. For buyers who really want to stick with a Dodge or Chrysler product, the Town & Country is a better offering than the Dodge. It still falls short of used minivans built by Kia, Toyota, and Honda. 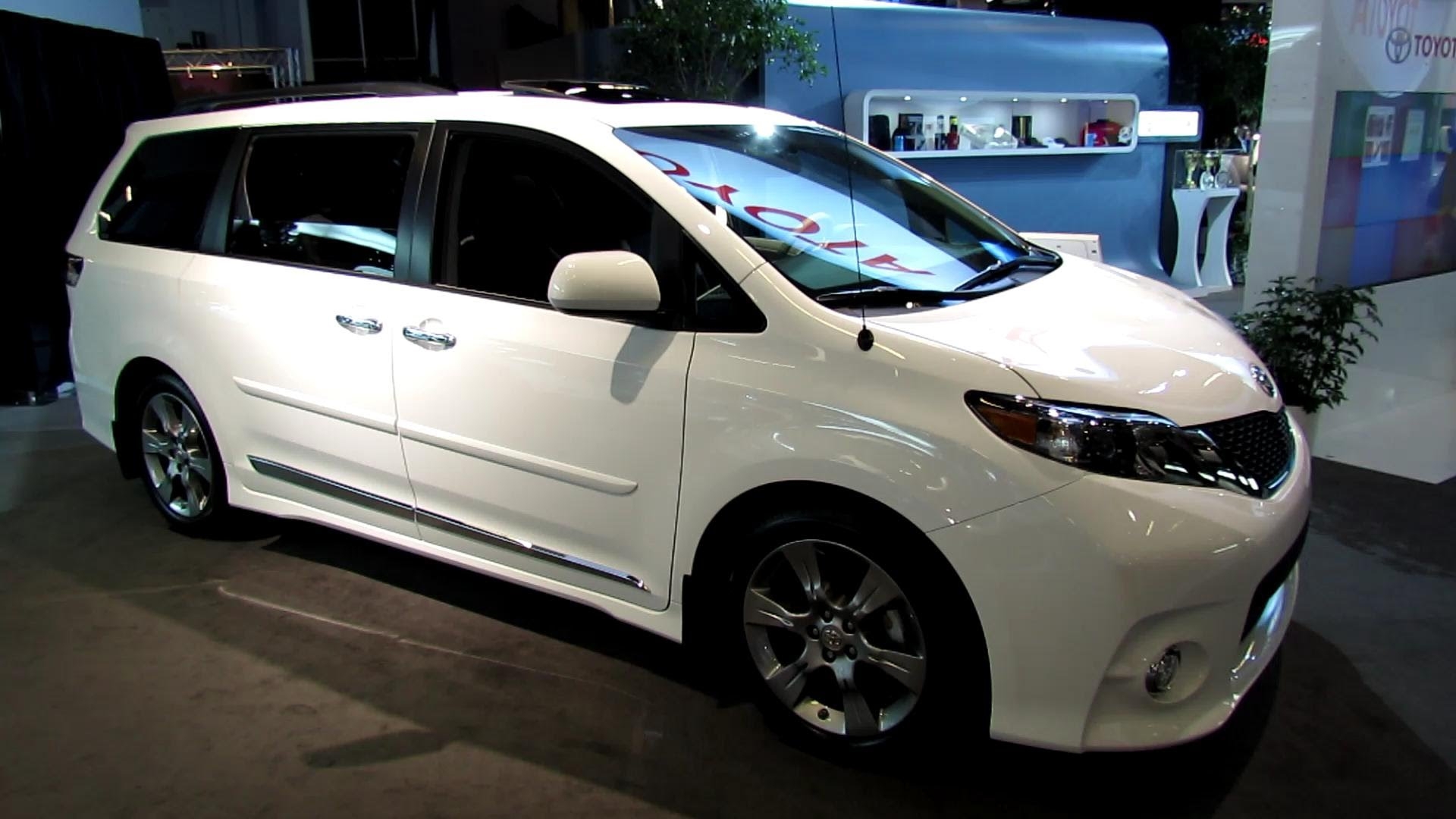 On paper, the Toyota Sienna seems to offer everything. It is roomy and has plenty of cargo space. Unfortunately, what looks good on paper isn’t always good in real life.

In reality, the roomy interior is full of odd shaped materials and cheap plastics that can easily turn anyone off. Oddly, as you move up the trim lines the Sienna loses ride and handling quality. The Sienna’s second row of seating does move quite a distance on its slide mechanisms, but the seats are quite difficult to remove if you want them out of the way for added cargo space. The single engine option after the 2008 model year is a 3.5L V6 that delivers 266 hp and 245 lb-ft of torque. The engine is always paired to a six-speed automatic. The combo offers middle-of-the-road fuel economy of 20 mpg combined.

Where the Toyota Sienna stands out among used minivans is the available all-wheel drive system. This is a great option for buyers who must contend with a lot of snow and ice. 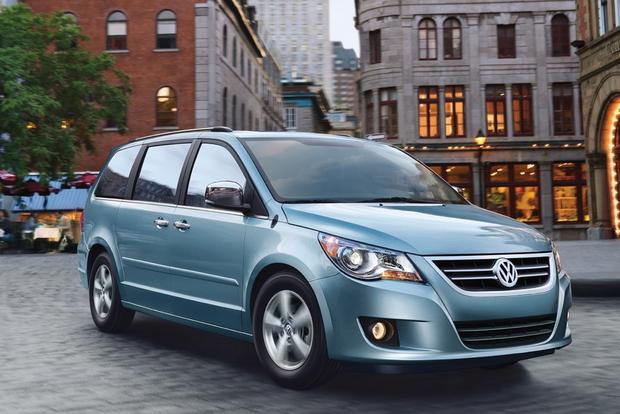 Volkswagen took a Chrysler Town & Country platform and offered the world the Volkswagen Routan for the 2008 through 2013 model years. Few buyers were impressed. Even fewer used minivan buyers should be.

Beyond having Chrysler underpinnings that will be serviced by Volkswagen certified mechanics, you get a rebadge that is even worse than the original. The nicest thing that can be said about the Town & Country is that it offers Stow ‘n Go seating and great seating versatility. VW somehow managed to keep the system, but eliminate the versatility. The Routan was designed to offer a firmer suspension for a more fun driving experience. Another fail. When compared to Kia and Honda used minivans, the firmer suspension makes for a clumsier experience all around. These shortcomings put a lot of pressure on the powertrain to offer a glimmer of hope for this used minivan. Nope, nope, nope. You get the same 3.6L engine found in the Dodge and Chrysler minivans on our list. The only difference is that it is now in a slightly heavier minivan.

The Best Used Minivan To Buy 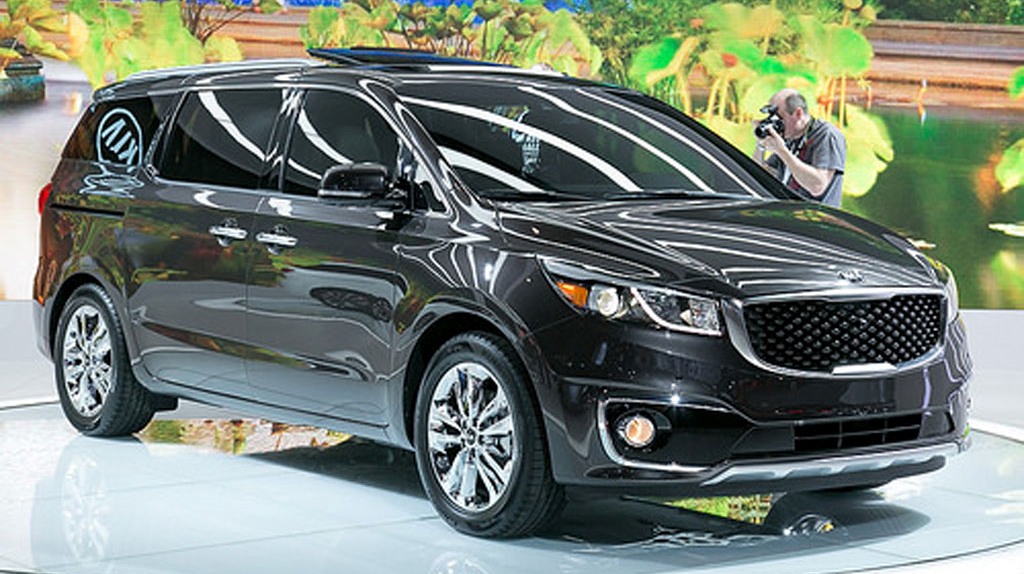 We couldn’t leave you with a cloud of gloom and doom over the entire world of used minivans. So, here is the best used minivan in our opinion…the Kia Sedona.

The Kia Sedona can stand toe-to-toe with any of the used minivans on the market. The current models are powered by a 3.3L V6 paired to a smooth shifting six-speed automatic gearbox. The engine has an output of 276 hp and 248 lb-ft of torque. Most owners describe the engine’s acceleration as quick and its response as immediate. The Sedona outshines its competitors by offering a lower price point and more options for every dollar spent.

We do have to point out that the Sedona offers less cargo space than several of the used minivans on the list and does not offer removable second-row seating on any trim level. Those shortcomings are overcome in our minds by the generous warranty, low sticker price, and long-term durability of the Kia Sedona.

Comments Off on #Used #minivans-Used minivans